While no fan of sharing with the media, Jozy Altidore’s voice has been loud and clear in recent months.

The Toronto FC striker has used social media to call out FIFA and UEFA on racism, lambasted Donald Trump, talked up younger teammates and cheered on the NWSL’s return to action.

He has been away from his son — who turns six later this month — as Toronto is forced to play home games in East Hartford because of pandemic-prompted border restrictions.

“It’s hard. I’m learning on the go,” he said in a rare virtual meeting with reporters on Friday. “I’m for the most part a single dad, in terms of I have full custody of my son. Going through long stretches and he’s not seeing me around, I think that’s really difficult for him and difficult for me.

“I don’t really know how to deal with those situations, having not dealt with them like this before. We all have kids, we all have families and it’s difficult to try to explain these things when they don’t really get the concept of time. That part makes it all the more difficult because they’re innocent — the kids don’t really know what’s going on.”

“To be honest, I’m just navigating it like everybody else,” he added. “Just trying to find the best way forward. To be honest I just can’t wait ’til it’s all over, just to be with the families and regroup. Hopefully next year things can move in a more positive way for the league and just in general.”

WATCH | Players protest before MLS is Back Tournament: 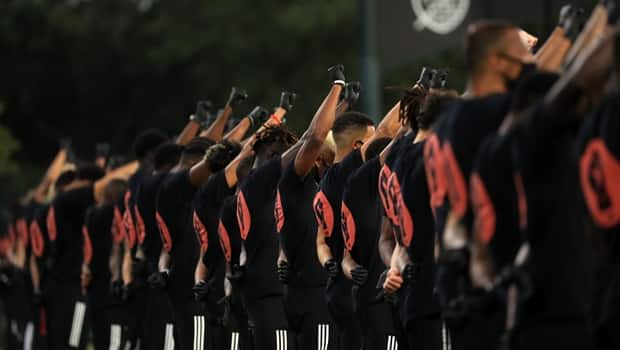 Before the MLS is Back Tournament got underway, members of the Black Players for Change took to the field in a joint protest to send a powerful message about social injustice. 6:13

Balancing playing soccer and the fight for justice off the field has been “mentally and emotionally … absolutely draining,” he said.

“To have to deal with everything going on and wanting to obviously play a part in it and help out, but then obviously the emotional and physical side of playing in these games, it’s been very very difficult.”

The football field is usually a refuge or escape for players like Altidore. Not so this year, with stands empty and pressing matters to be taken care off away from soccer.

“Now that kind of sense of reality still follows you even on the field,” he said. “Playing in the empty stadiums, there is no atmosphere … It’s not really that much of an escape any more.”

His experience with racism

The fight against systemic racism hits close to home for Altidore, who has seen the best and worst the world has to offer.

Now 30, he has played club soccer in England, the Netherlands, Spain and Turkey as well as North America. With 115 caps, he has travelled the world with the U.S.

He can’t put a number on the times he has been a part of racial abuse, saying it is in the “easily hundreds.” He’s heard monkey chants in the Netherlands and the N-word in Mexico.

Asked if he believes progress being made, Altidore said he sees people talking about wanting change and trying to help — “but it lasts a week or two and then it goes away.

“And when I say that, I mean more so white people. I think a lot of white people will say yeah they want to help, but it lasts for a week or two, it’s a couple of social media posts and then it’s gone.”

Racial abuse “hundreds” of times, even on the field. Off the field, threats in his DMs.<a href=”https://twitter.com/JozyAltidore?ref_src=twsrc%5Etfw”>@JozyAltidore</a> explains the reality of racism and says it’s time for FIFA to lead the change, and be “brave” like he’s had to be.<br><br>Warning: Contains uncensored racial slurs and profanity. <a href=”https://t.co/geer5SkfPS”>pic.twitter.com/geer5SkfPS</a>

He urged people to continue having “these tough conversations” and actively move forward — “not just on social media and when it’s convenient.”

World events have put soccer “second or third” in the rear-view mirror when normally it would be first, he said.

After the Milwaukee Bucks refused to play Aug 26 to protest the shooting of Jacob Blake, a Black man, in Kenosha, Wisconsin, Altidore elected not to take part in Toronto’s game at Montreal two days later.

At the time the club said it was for personal reasons. Altidore was shown watching from the stands at Saputo Stadium. It seemed clear soccer was not on his mind.

Altidore said Friday he wanted to “stand in solidarity with players” who opted not to play in the wake of the shooting.

As for the political situation south of the border, Altidore said neither candidate “is exactly what everybody has hoped for or wanted.”

“Everybody individually has to do what they can to vote in away that’s obviously for the reform, for the things they care about … Everybody has different things that matter to them.”

He said he found this week’s presidential debate tough to watch.

“I thought it was embarrassing … It seemed a bit more like toddlers fighting than it did a couple of grown men taking about the issues that are important to a lot of people.”