Almost overnight it seemed, in late February, Italy became the world epicentre of the coronavirus pandemic. It began with alarm in a cluster of 11 small towns in the northern regions of Lombardy and Veneto, where people began to fall fatally ill.

Suddenly, the towns were declared red zones and were cut off from the rest of the world. But it was too late. The virus was spreading, and by early March, all of Italy entered a lockdown that would last more than two months. A half a year later, more than 36,000 Italians have died of COVID-19, most in Lombardy.

The lives of foreign correspondents changed overnight, too. From late February on, there was only one story in Italy. While residents shut themselves inside under strict orders to go out only for necessities, essential workers — from nurses and doctors to supermarket cashiers — continued to work. So, too, did journalists and photographers.

This week, Lockdown Italia: As Seen by the Foreign Press, which tells the story of those first traumatic months in Italy, opened in Rome’s Capitoline Museums.

The exhibit features 73 photographs taken by 30 members of Italy’s Foreign Press Association who risked their own health to cover the pandemic in Italy — stepping into full protective gear to enter intensive care units, capture the exhaustion of health-care workers at the end of their shift, follow funerals and portray moments of everyday generosity and community across balconies.

Trisha Thomas, president of Italy’s Foreign Press Association, said when she first proposed the idea of a photography exhibit to depict those early months of the silently spreading disease, some colleagues balked, saying it wasn’t yet time to reflect back on an experience that was far from over. As it turns out, the exhibit opened just as infection rates once again began to rise in the country.

“The coffins and people who didn’t have a funeral and what happened in the intensive care units,” Thomas said, “this could happen again in the next months if people don’t pay attention.”

While the contagion was low in southern Italy during the first wave of COVID-19, poverty and joblessness in cities such as Naples are widespread. So, too, are gestures of solidarity, like the “suspended coffee“ tradition. During the lockdown, an old Neapolitan custom was revived, where a homemaker would place some money into a basket and lower it to street level, and a butcher or fishmonger would replace it with goods. But this time, residents left the baskets hanging with edibles, encouraging citizens to give and take.

“When I took [a photo of] this nurse in an IC unit with her goggles fogged over, I knew it would be a strong portrait because it was so unusual. But I also saw myself reflected back, because I was in same condition, with goggles completely fogged over trying to see out and do my job,” said Alberto Pizzoli, a photographer with AFP.

“Every image we took was something we had never seen before,” he said. “We’d never seen this number of sick, we’d never seen our cities emptied out. It was an overwhelming absence.”

“I drove down a completely empty highway to the Amalfi coast to do a story on the lemon industry that had collapsed during the lockdown. No one was able to pick them and tons and tons of lemons had fallen to the ground and were rotting. I arrived at the town of Amalfi, which is always crammed with tourists, and found the central piazza empty. It was a very strange sensation: not a soul around except for three residents in masks conversing in the middle of the square,” said longtime Rome freelance photographer Chris Warde-Jones.

“I’ve photographed everything from amputations to riots, but the coronavirus outbreak is by far the weirdest experience I’ve had. As a photographer, you head out looking to capture a subject, whether it’s a person or landscape, but with coronavirus, you were trying to capture an absence.”

“It was a quiet day in the late afternoon in the middle of lockdown when I took that picture,” said Yara Nardi, a Reuters photographer. “I was just hanging out on my small terrace, looking around, when I spotted a small group of people on a distant rooftop dancing. It was too far to hear the music, but it was such a beautiful sight.”

Nardi said that what struck her most about the lockdown was the way people began to occupy small, usually neglected external spaces in their apartments. “After a while, you began to realize that people depended on the small outdoor spaces to get by,” she said. “Spaces that had always been empty but that during lockdown contained life, a lot of life.”

The Pope usually delivers his Urbi et Orbi address — to the city of Rome and to the world — twice yearly, on Christmas Day and Easter Sunday. But at the peak of the pandemic, under a gloomy sky and on glistening cobblestones, he told some 11 million viewers, “Thick darkness has gathered over our squares, our streets and our cities; it has taken over our lives.

“The pandemic has reminded us that we are all in the same boat,” Pope Francis said. “The storm exposes our vulnerability and uncovers those false and superfluous certainties around which we have constructed our daily schedules.”

During the lockdown, everyone was required to stay at home, something impossible for the homeless. Turkish photographer Esma Cakir captured one of the hundreds of homeless who roamed the deserted Eternal City during lockdown.

“Italy had just entered lockdown a few days earlier when I took this picture of the homeless woman in one of Rome’s most beautiful squares, Piazza Navona,” Cakir said. “She was quite happily on her own, reading a book about a post-apocalyptic world. When I asked her how she was experiencing the lockdown, she motioned around the empty square, usually crowded with tourists, and said, ‘It’s all mine now.'”

WATCH | Early months of COVID-19 pandemic in Italy on display in photo exhibit: 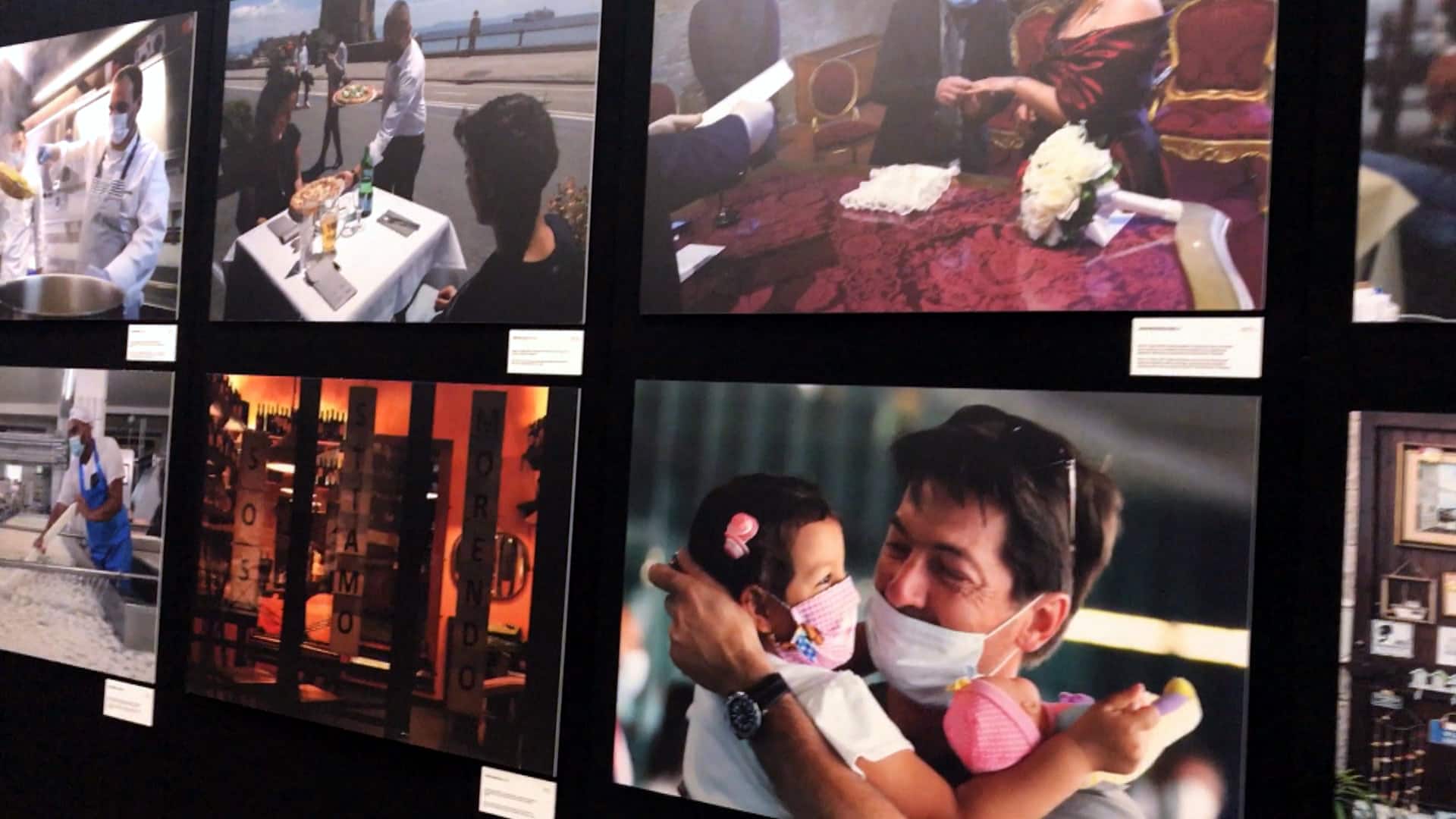 Lockdown in Italia: As Seen by the Foreign Press, an exhibit at Rome’s Capitoline Museums, features 73 photographs of life in Italy during the pandemic — from hospitals and funerals to moments of generosity. 1:49